According to industry sources, Microchip prohibits agents to more than 100 traders, IDH and other shipments, if once found that agents shipped to them, unconditional cancellation of the agency.
In fact, ATMEL hasn't been bought by Microchip before, and it's often done, so it's not surprising to be on Microchip now!
However, if the original Microchip factory really fight up, but also like the original factory ADI broke all traders and IDH goods, this really can only recall the past.
Microchip: Premier Farnell, AO-Electronics agents (AO and Digi-Key (electronic one), Arrow (electronic DJ) arrow), jiwanxun electronic, Burnon international, wo Qi trade, Gao Jian Industrial Company, double micro, WPG holdings, electrical, electronic, bit wins the prestige and so on.
Microchip why is the tense agent chamber of Commerce available to traders, IDH?
Microchip from an obscure small company to the semiconductor industry, the wind vane, alerted the industry or last April, Microchip to $744 million, now acquire ATME. Agents face reshuffle, part of the IC product line was chopped, alternatives are not easy to find in the short term, the market shortage becomes inevitable.
Microchip in the acquisition of Atmel directly lead to tight production capacity AT24C, AT24C series of chips on the market there is a brief shortage of goods grab phenomenon. Today, products, line up and planning have begun to push, both sides of the original main product line will be intact, continue to supply customers.
If now agents at this time to the goods to traders, IDH, then, and not broken the way back.
Microchip technology President Steve Sanghi has said that the semiconductor industry growth rate is slowing, although there are still some companies in the industry to maintain rapid growth, but the ordinary semiconductor enterprises annual earnings showed moderate level, has entered a stable middle state.
Microchip market share in MCU
In fact, from the beginning of 20015 years, to compete for market share, the layout of the strong growth of Internet of things applications, MCU major vendors between a number of large-scale mergers and acquisitions. According to market research firm IC Insight statistics, from the completion of the acquisition after the acquisition of sales data, NXP, Microchip and Cypress in 2016 MCU product line sales growth, ranking also rose accordingly. ST and TI have fallen sharply. 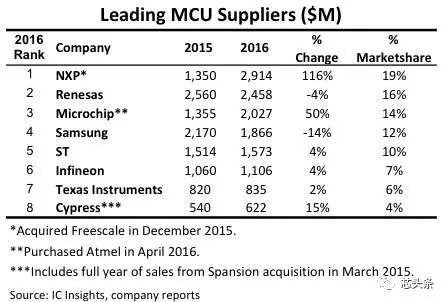 The MCU market is expected to peak in 2020 with sales of $20 billion 900 million and sales of 26 billion 700 million chips. In view of such market situation. 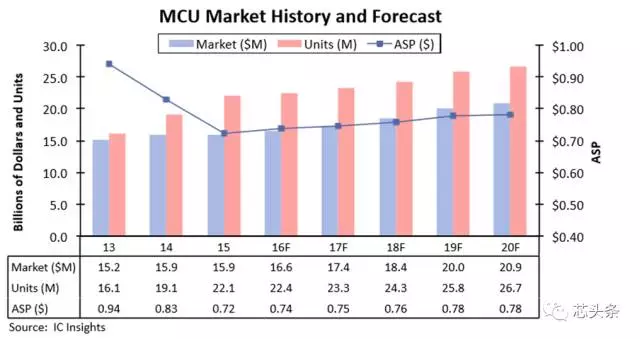 On the whole, because the situation is too good, it will cause people to be vigilant and prevent unexpected accidents. Whether the news is true or not, do not want any core headlines a Microchip factory to cancel the agent right, after all, with Taiyuan "mixed" good or good works. But from the current situation, everything seems to be very optimistic.